WordPress reminded us on Saturday that it was the fourth birthday of Medieval Sai Project @ wordpress platform!

One element that has characterized all these four years is the presentation of the new volumes of the peer-review journal of The Sudan Archaeological Research Society, titled Sudan & Nubia. Volume 14 was presented HERE, volume 15 HERE, volume 16 HERE, volume 17 HERE, and volume 18, well, here-by:

Some things did not change from last year at all. This means that there was again no paper dedicated to fieldwork conducted on Sai Island, while the medieval period was the object of just one paper, with a couple more indirect references.

This does not mean that the reports presented were uninteresting, even though one should stress that to the exception of the reproduction of the Kirwan Memorial Lecture all the rest of the 18 contributions are categorized by the editors as “reports”. This is the phase that Sudan Archaeology is into currently: lots of fieldwork – mostly supported by the QSAP – means a lot of energy invested in new discoveries and little focus on the study of the material.

Nevertheless, the paper by Pernille Bangsgaard on “Animal Deposits at H29, a Kerma Ancien cemetery in the Northern Dongola Reach” presents the results of the osteological study conducted on material excavated in 2011-12. Moreover, the paper by Pavel Onderka on “Wad ben Naga: a history of the site” and by Pawel Wolf, Ulrike Nowotnick and Florian Wöß on “Meroitic Hamadab – a century after its discovery” offer much more than just a field season’s report, since they recapitulate knowledge assembled through long periods of fieldwork and study.

Also, the paper by Cornelia Kleinitz on “The graffiti of Musawwarat es-Sufra: current research on historic inscriptions, images and markings at the Great Enclosure” is a very useful description of a project that is very promising, also for matters of literacy in the medieval period.

As a particularly important contribution we consider the paper by Matthew Davies from his fieldwork in South Sudan. It is noteworthy that such attempts are being initiated in the context of the difficult new realities for the South Sudanese.

Otherwise, a thing that changed in this year’s volume of Sudan & Nubia is the number of contributions by Sudanese researchers: only two papers are authored exclusively by Sudanese, while in two more Sudanese are co-authors. Interestingly, Mahmoud Suliman Bashir figures thus on the top of the list of contributors in this volume (behind his name of course there is a long list of field archaeologists and other specialists who are always referred to in detail in the respective reports); Derek Welsby, Ross Thomas, and Vivian Davies appearing (just) twice.

Vivian Davies is actually the author of the Kirwan Memorial Lecture which was expected last year: “From Halfa to Kareima: F.W. Green in Sudan”. And it is in this lecture that Sai Island (and our project!) gains a reference with a drawing from the column capital from the so-called cathedral site that is decorated with the so-much discussed in our blog eight-pointed cross.

From the reference in Davies’ paper to the passing of Green from Jebel Balal, near the village of Kassinger, some kilometres upstream from Jebel Barkal, we are also reminded of the inscription found there in a rock shelter identified by Sayce as an anachorete’s dwelling. The inscription reads:

The interpretation proposed claims “that the workers for gold believed themselves to be under the patronage of the Apostles Peter and Andrew” (Sayce A.H., “Karian, Egyptian and Nubian-Greek Inscriptions from the Sudan”, Proceedings of the Society of Biblical Archaeology 40 (1910), pp. 267-268, pl. xli, no. 12). A logical explanation, but one that considers gold mining in the area as contemporaneous to ascetic activities. If that’s the case, are we to understand the reference to the two brothers who became the first apostles of Jesus as a hint that there was a relation of brotherhood between a “monk” and a “seeker of gold”?

Two more references to medieval inscriptions can be found in Sudan & Nubia 18:

1. In the report from the 2013-4 field season at Dangeil, Julie Anderson, Mahmoud Suliman Bashir and Salah Mohamed Ahmed include the photo (Plate 5) of a Christian (?) period shard with an inscription that they read as H/I?]NOC. If this reading is correct, then the image is published upside down. If the direction of the shard is the one which is shown in the photo though, then the inscription reads something else. I am not able to identify the first letter, but the four that follow read ONTH while there can be discerned a Δ right after written in characteristic Nubian majuscules, just like the rest of the discernible letters. Thus, the shape of the illegible first letter would be either O or Ω. In any case, a very interesting find and will be looking forward to learning more about the medieval phases of life at Dangeil!

2. In the report from the “Excavations in the fort, site KRG2”, 1,2 km from the Hagr el-Merwa Pharaonic site and cemetery, we learn that the site is now to be dated in the medieval period! A note on the ceramics written by Petra Weschenfelder informs us that the Classic Christian period is “the best represented in the ceramic assemblage of the tower area excavated in the 2014 season” and that this assemblage included “incisions of Christian symbols and inscriptions hinting towards the piety of the inhabitants” and “showing that they shared ideas that were part of the cultural milieu of the Christian kingdoms during that period” (quotes from page 152).

Perhaps the most important reference to the medieval period though can be gleaned by the report prepared by Mahmoud Suliman Bashir about the “QSAP Dam-Debba Archaeological Survey Project (DDASP), Preliminary report on the NCAM mission’s first season, 2013-2014”: at site DS 7 at Ganatti the area of the medieval church was expropriated and excavations begun revealing “seven complete, well preserved granite columns lying on the ground surface, together with a dense scatter of red-brick fragments and plaster along with Christian postsherds” (quote from p. 158). Good luck for the challenging work to all members of the team lead by Dr. Elgazafi Youssif!

There is one last point to make about the other paper in which Mahmoud is co-author together with Philippe Ruffieux, namely the “Preliminary report on some New Kingdom amphorae from the Korosko Road”. The structures in which the amphorae were deposited look very much like some of the “Pottery Deposits at the Fourth Cataract” that were recorded by Alexandros Tsakos and Ulrike Nowotnick during surveys in the frame of the Merowe Dam Archaeological Project. The results were published in the 2012 in the Proceedings of the Third International Conference on the Archaeology of the Fourth Nile Cataract, University of Cologne, 13-14 July 2006. Africa Præhistorica 22, pp. 91-99 & pl. 17,1.

The Korosko Road project is one of the British field projects in Sudan. Kurgus, Kawa, and Dangeil are three more. In total, these four projects take up more than half of the 18th volume of Sudan & Nubia, showing the importance of the contributions by the British in Sudan Archaeology.

The event brings together (mainly) British archaeologists working in Africa. Sudan was represented by Laurence Smith who must have presented something very similar to his talk in Neuchâtel since the title is the same as then: “Archaeology, Trade and Pilgrimage at Suakin”. Another Sudanological talk was by Maria Gatto who spoke about: “At the border between Egypt and Nubia: ten years of archaeological research in the Aswan-Kom Ombo region”. You can find the full programme HERE.

And with this, we complete a week that was quite marked with English atmosphere, since John Gait, who became a good friend for us, must have just returned to his base in Athens, Greece!

Most probably, the next time we write in our blog, it will be from Paris, where Alexandros is traveling in exactly a week from now in the frame of the Aurora mobility grant. There, lots of work with Robin Seignobos is awaiting. So, nothing more fitting than concluding today’s entry with a picture that Robin sent to us during his last visit to London! 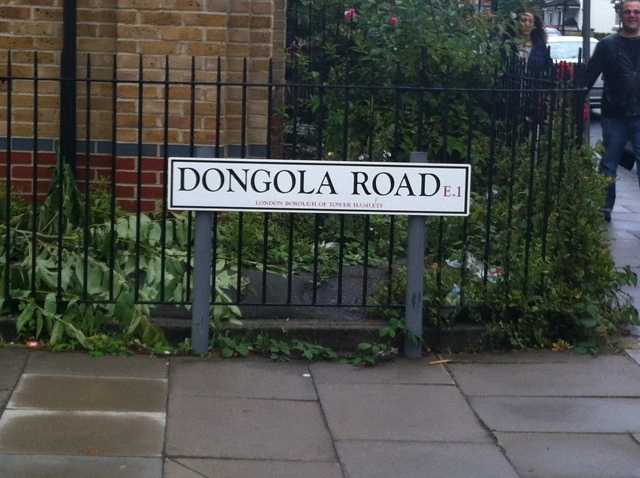