The title of today’s entry describes quite accurately the purpose of my visit to Berlin during this week. I would be having meetings with Claudia Näser, the supervisor of my thesis at the Institute for the study of the Archaeology and Cultural History of Northeast Africa (AKNOA). The institute has left its old premises at Hausvogteiplatz and has just moved into the western wing of the central building of Humboldt University. While the employees are still unpacking their stuff and getting settled in the new offices, some replicas of ancient monuments have found their place on the walls and are welcoming impressively the visitor.

I also visited the old premises of AKNOA, though, since Claudia is running from there her projects in the frame of the Qatar Sudan Archaeological Project at Musawwarat es Sufra and Mograt Island. She is also active with the study and preparation for publication of the results from the Humboldt University Nubian Expedition in the frame of the Merowe Dam Archaeological Salvage Project, during which a team from Berlin discovered the magnificent cachet of 140 manuscript fragments on parchment and leather in a room behind the apse of the church on the island of Sur in the Fourth Cataract region. The excavations took place in 2007 under the direction of Daniella Billig who is working on her thesis at Humboldt University and who unearthed this important collection of manuscripts adding substantially to our knowledge of literacy in Christian Nubia. For my thesis I studied the Greek manuscripts on parchment, but since then I was also given the honorable responsibility of studying and publishing the manuscripts on leather that were written in Old Nubian. A first combined presentation of the results of my thesis and the first tackling of the Old Nubian manuscripts was my contribution to the 13th International Conference for Nubian Studies that took place in the beginning of the month in Neuchâtel. Now, the time had come to travel to Berlin and discuss with Claudia the future actions to be taken for this study to be accelerated and arrive in due time to the printers’ house.

My main task therefore was to inspect from closer the manuscripts on leather kept at the Conservation department for Papyrus and Parchment of the Egyptian Museum in Berlin. The head conservator there, Myriam Krutzsch, has been a key person for my understanding of the materiality of these manuscripts and it was at her lab that I spent most of my time. The object that attracted a lot of our attention this time was the leather manuscript coded SR022.A/388, which for codicological reasons may give evidence for the latest phases of Nubian literacy. The object has been conserved by Sophie Geiseler in 2010, but now it was Myriam who set it free from its box so as to be studied closer. 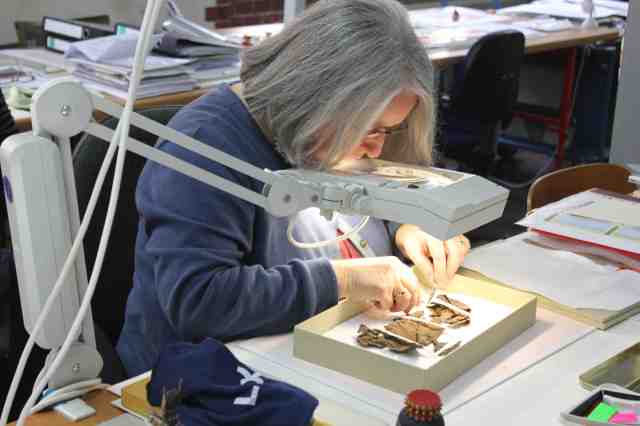 The next step involved its photographing, because it proves constantly that well-taken photographs manipulated professionally with photoshop, offer optimal potential for reading, transcribing, and understanding of a given text. This task was undertaken by Andreas Paasch (working mainly with the photographic documentation of finds from Elephantine) who kindly spent some hours working on all the leather manuscripts from Sur that were worth his efforts.

The outcome of Andreas’ excellent work left me staring at the letters that almost magically appeared on the screen after the raw format image file had been transformed into a black and white tiff file without the noise of the colours that shadowed the surface and did not allow me before to read but a couple of letters.

My reading will be presented in due time together with the rest of the new finds.

But at the Egyptian Museum in Berlin, one does not only go to study new finds.

The collection hides unexpected treasures, and one of them was discovered by Myriam Krutzsch. Prof. Dr. Verena Lepper, Curator for Egyptian and Oriental Papyri at the museum, was kind enough to receive me and accept my request to study from closer some unknown manuscripts from Nubia. Although Myriam and I still try to find out more about the provenance of the most intriguing object – since we only know that it was purchased in the early 20th century from Egyptian Nubia – we decided it’s worth having it photographed by Andreas so as to be ready to decipher it when some pieces of the puzzle of the Berlin collection have fallen in place… 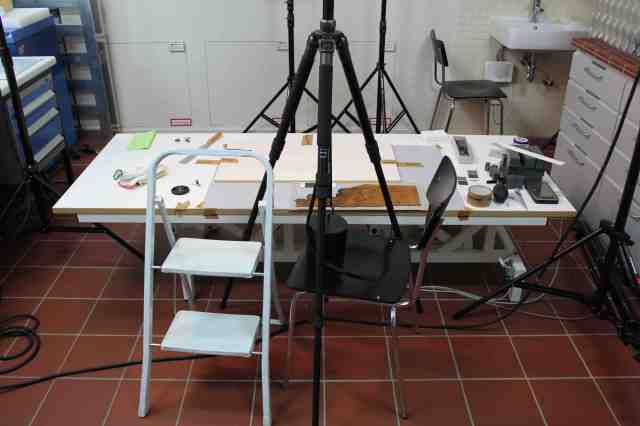 I think this picture is a fine way to conclude this entry leaving open the door for a return to Berlin and the excellent atmosphere of collaboration I found there.

1 Response to Nubian manuscripts in Berlin